Crowds gathered at many BTS stations around Bangkok today, just before 6pm. Then they sang the National Anthem, raised their 3-finger salute, and most went home right after the song finished.

At about 4pm today, the Protest coordinators, the United Front of Thammasat and Demonstration and the Free YOUTH movement, took to Facebook to urge supporters to gather at all BTS and MRT stations at 5.50pm, and wait for instructions on where to converge for its “big surprise”.

Meanwhile, a crowd show-up at the Pakkred intersection in Nonthaburi at 5pm. They were mostly students in uniform, from both secondary schools and universities.

Right after the 6pm, the United Front of Thammasat and Demonstration posted on their Facebook page that the “big surprise” today is that they are taking a rest. They gave the Government 24 hours to meet their demands, otherwise there will be a huge demonstration tomorrow.

Though the protest coordinators do not directly organize demonstrations, they announce several gathering locations around Bangkok, where the crowd just show up to protest without leadership. There were gatherings at Central Pinklao in Bangkok, at the Khunpaen Pavilion in Kanchanaburi province, at the Payoon roundabout in Trang province, at the Van Station, opposite Future Park Mall in Pathum Thani province, and at the Sam-Kruba Monument in Lamphun. 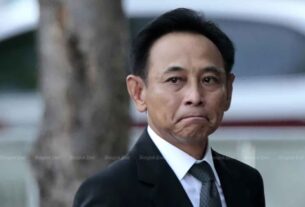