The Unlockzie, a beer can cooler with image recognition technology, will offer fans the chance to unlock entries for prizes throughout the season 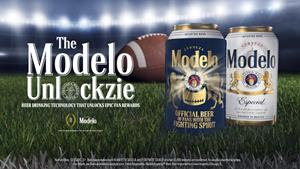 Modelo is unveiling the Unlockzie, a free beer can cooler with technology that allows fans to unlock entries for prizes throughout the college football season.

CHICAGO, Sept. 30, 2021 (GLOBE NEWSWIRE) — College football is back in full swing and Modelo, the beer brewed for those with The Fighting Spirit™, is rewarding passionate fans across the country with a brand-new offering. To ensure all fans have a cold beer for game day Saturdays, Modelo is unveiling the Unlockzie, a free beer can cooler with technology that allows fans to unlock entries for prizes throughout the college football season.

The Unlockzie features a specially-designed seal and a unique cutout that completes a scannable image when a 12 oz. can of Modelo Especial is placed inside the beer can cooler. Fans will be able to scan this completed image on their mobile device using image recognition technology, giving them the opportunity to unlock entries for prizes each week.

The grand prize for one lucky fan is any college football lover’s dream—two tickets to the College Football Playoff National Championship on January 10, 2022. Each week, fans will be able to enter for a chance to win a weekly prize including a year’s worth of Modelo beer (awarded in the form of a $300 Sponsor-specified gift card) and Modelo swag.

“The Modelo Unlockzie provides an engaging way for fans to amplify their football experience while supporting their team with a cold Modelo in hand,” said Greg Gallagher, Vice President of Brand Marketing, Modelo. “Joining the roster as Official Beer Sponsor of the College Football Playoff is an opportunity to build our football fanbase and create a lasting Modelo connection with drinkers who bring their unique fighting spirt to each and every game day.”

The Unlockzie is available for free while supplies last at ModeloUnlockzie.com, and fans should follow @ModeloUSA on Instagram and Twitter throughout the regular college football season for news on when more Unlockzies will be released. See here for assets.

ABOUT MODELO®
Born in 1925 in the small town of Tacuba, Mexico, Modelo has been bringing distinctive high-quality beer to people ever since, including Modelo Especial®, Modelo Negra®, and a flavorful lineup of Modelo Cheladas. Modelo Especial is a golden, full-flavored Pilsner-style Lager with a clean, crisp finish. As the #1 imported beer in the U.S., Modelo Especial recently surpassed 150MM cases sold in 2021. The Modelo family of beers are exclusively brewed, imported and marketed for the U.S. by Constellation Brands.

ABOUT THE COLLEGE FOOTBALL PLAYOFF
The College Football Playoff matches the No. 1 ranked team vs. No. 4, and No. 2 vs. No. 3 in semifinal games that rotate annually among six bowl games – the Goodyear Cotton Bowl Classic, PlayStation Fiesta Bowl, Chick-fil-A Peach Bowl, Capital One Orange Bowl, Allstate Sugar Bowl and Rose Bowl Game. This season’s Playoff Semifinals will take place Friday, December 31, 2021, at the Cotton Bowl and Orange Bowl. The College Football Playoff National Championship will be Monday, January 10, 2022, at Lucas Oil Stadium in Indianapolis, Indiana.

A photo accompanying this announcement is available at https://www.globenewswire.com/NewsRoom/AttachmentNg/451183d3-3683-4ace-ba52-cea677d97496